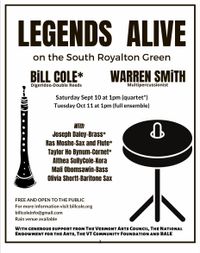 Bill Cole, an 84 year old Black citizen of Vermont, is presenting a series of FREE Outdoor concerts with his talented all-BIPOC ensemble of musicians Saturday September 10th at 1:00 pm and Tuesday October 11th at 1:00 pm on the South Royalton Green.

The group, known as The Untempered Ensemble, has performed throughout the region and uses their highly developed, culturally enriched, instrumental skills to create spontaneous, never-before-heard improvisations.

“The Untempered Ensemble…continues a tradition started nearly twenty years ago by Cole, putting together performers both young and old, established and up-and-coming, to forge music representing Bill Coles’ singular vision of Eastern, Indigenous and African enhanced Jazz.” S. Victor Aaron (co-founder and publisher @ something else)

On October 11th, audiences will get the opportunity to hear the World Premier of Bill Cole’s improvisations based on the proverbs of the Yoruba of Nigeria.

These performances are funded by a grant from the Vermont Arts Council, The National Endowment for the Arts, the Vermont Community Foundation and support from BALE (Building A Local Economy) in South Royalton. Rain accommodations will be available.