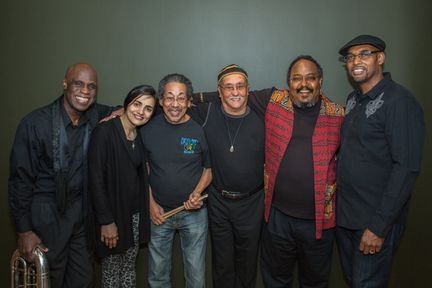 The Untempered Ensemble was founded in 1992 by Bill Cole as a trio.  The first members of the group were Bill Cole, Warren Smith and Joe Daley.  Later, in the 1990's, bassist William Parker and multi-instrumentalist Cooper-Moore joined the group.  Soon after that, the reed player Sam Furnace was asked to join and then, at the end of the 1990's, Cole's son Atticus became a member of the group, playing hand drums.  This group recorded four CDs for Boxholder Records during the early 2000's and gave numerous performances, including at the Weil Recital Hall at Carnegie Music Hall in New York.

The Untempered Ensemble added Bill Cole's daughter Althea SullyCole as a vocalist in the group at their 8th appearance in the Vision Festival in New York City in 2009. She would later also join the group with her kora.

The Untempered Ensemble has been in existence for more than 20 years.  During all of these years Bill, Warren and Joseph have been members and have formed the foundation of the Ensemble.  The longevity of the group is a testament to the commitment, and the outstanding and creative work, of its members 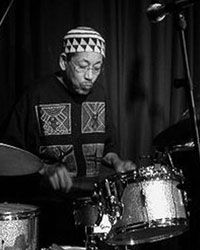 WARREN SMITH Born in Chicago Illinois, Warren I. Smith entered the professional music world at the early age of fourteen, working in various family bands in the late 1940’s and later in the mid-50’s with Captain Walter H. Dyett’s concert and marching bands. Warren Smith has firm roots grounded in the Chicago south side music scene. Warren is a part of an essential element in the development and definition of Afro-American music.

Warren relocated to New York City in 1957 and completed his Masters of Musicat the Manhattan School of Music in 1958. That same year brought his first jazz gig in New York City with Kenny Burrell at Minton’s Playhouse. W.I.S. played Birdland in 1959 with Gil Evans, and from 1960-1972 worked regularly with Johnny Richards’ Bigband. It was around that time that Warren began extensive work both in the studios and on Broadway.

Already an articulate voice within the jazz community, Warren Smith found himself deep inside the Motown scene throughout the 1960’s and 70’s. Being the unsung percussionist on the scene with Bernard Purdie, Warren played on all the Gladys Knight and the Pips’ 45 hit singles; performed on numerous occasions with Dionne Warwick; did several tours, recording sessions and TV dates with Harry Bellafonte; backed up Nat King Cole on his week summer tour of New England, 1964; played the R n R Shows with Murray the K. in Brooklyn; toured with Barbra Streisand throughout the U.S. in 1965; worked on the ABC New York staff orchestra 1964-67 - including the Jimmy Dean Show and the Less Crane/Nippsy Russell Show; recorded on the only collaborative album done by Marvin Gaye and Tammy Terrell; musical director of Janis Joplin in 1969- playing the Ed Sullivan Show, the San Francisco Ice Palace and her only European tour; recorded, toured and did live TV performances with Aretha Franklin from 1965-1978, including a performance at the 1971 Montreaux Jazz festival, which he also played with Tony Williams Lifetime EGO that same year.

Concurrently with his extensive Motown and studio work, Warren Smith began to teach at Adelphi University in 1969 and later at the State University of New York in Old Westbury from 1971-1996. Never losing sight, Warren has remained a prominent percussionist and drummer within the jazz world. Performing, touring and recording with every progressive from Charles Mingus to Miles Davis, from Muhal Richard Abrams to Sam Rivers, Max Roach, M’Boom, Jabbo Ware, David Murray, Sonny Sharock, Anthony Davis and many other masters of the music. 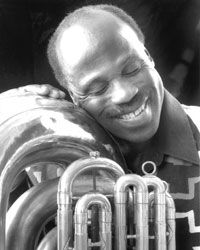 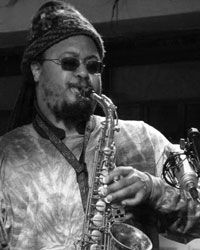 RAS MOSHE (formally known as Ted Burnett III) was born March 22, 1968 in Brooklyn NY. He studied music in public school and with his father. His grandfather-Theodore Burnett I ("Barnett" for professional reasons) played tenor and alto saxophones in the bands of Earl Bostic, Lucky Millender, Jimmy Mundy, Don Redman and many others after arriving in the U.S. from Jamaica. He also led small group combos with Shadow Wilson for many years. Although Ras is trained in earlier forms of "jazz", his preferred mode of improvisation is in the later or "free" developments of the music. Ras has also been writing and reciting poetry since childhood. He believes in the positive effect the new music will have on social and personal change. He has learned from Billy Bang and William Parker and played with William Hooker, Kali Z. Fasteau, Dafna Naphtali, Dom Minasi, Lou Grassi, Jackson Krall, Matana Roberts, Butch Morris, Kyoko Kitamura, Steve Swell, Matt Lavelle, Marc Edwards, Raphe Malik, Burton Greene, Roy Campbell, Daniel Carter, Sabir Mateen, Saco Yasuma and other original artists. 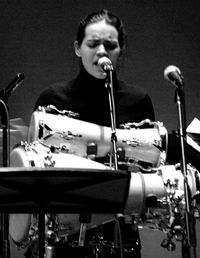 LISETTE SANTIAGO is a vocalist and percussionist from Brooklyn, N.Y. A graduate of LaGuardia High School of Music and the Performing Arts and Columbia University, Lisette began singing at an early age and was accepted into the Children’s Metropolitan Company at the age of nine. She later went on to study drum set and hand percussion. Lisette specializes in Afro-Cuban percussion such as batá and congas and has performed and studied with Cuban masters Pancho Quinto, Jose Luis "Chanquito" Quintana and Amelia Pedroso. Lisette has been a member of The Untempered Ensemble since 2014 and is currently working on projects, experimenting with electronics, vocals, percussion, and theremin. She has been a Latin Percussion endorsee since 2009. In addition to her performing career as a musician, Lisette actively teaches in and out of NYC/NJ and runs a music education company, Music Across Bridges (www.musicacrossbridges.com). 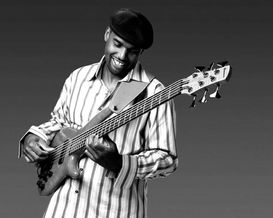 GERALD VEASLEY’s musical odyssey has been one of remarkable growth, a journey that has taken him to the top of the contemporary music world as a bassist, bandleader, composer, producer and educator.

As a bandleader, he has done memorable work with the Gerald Veasley Band, The Electric Mingus Project (of which he is also the founder), and his numerous all-star ventures, such as the nod to his hometown: The Sounds of Philly.

Veasley’s creativity as a composer has captured the imagination of listeners hungry for an innovative sound that is uniquely his own. His recorded work as a solo artist on the Heads Up International label, yielded heavy contemporary jazz radio airplay. Gerald’s recordings as a bandleader constitute a rich and evolving tapestry. Look Ahead (1992), Signs (1994), Soul Control (1996), Love Letters (1999), On The Fast Track (2001), Velvet (2003), At The Jazz Base (2005), Your Move (2008), Electric Mingus Project (2011) are vivid testaments to an artist perpetually defining and redefining his talent.

As an educator, Veasley has taught the history and fundamentals of the electric bass to musicians and educators, both privately and at the university level. He is a master lecturer in the Jazz Studies Department at The University of the Arts in Philadelphia. He also authored “Solo Bass Techniques” instructional video (Warner Bros. Publications); and a was a contributor on the “Jump Start” instructional video (Ibanez Guitars). He is also credited by author Allan Slutsky as a key contributor to his classic book/CD set “Standing in the Shadow of Motown – The Life and Music of legendary bassist James Jamerson.” In 2002, he co-founded Gerald Veasley’s Bass BootCamp®, and as its artistic director, he has nurtured a growing army of bassists from all skill levels. Indeed, this annual event has inspired attendees from 44 states and five countries to be better people as well as musicians. He has served in numerous volunteer leadership roles in the Grammy organization. He was selected for the inaugural Board of Governors for the Philadelphia Chapter, served five years as Chapter President, two terms as a National Trustee and worked on the National Nominations Review Committee. He lent his voice to a number of NARAS initiatives: Grammy in the Schools, Grammys on the Hill, and MusicCares.

No one quite sounds like Gerald Veasley. If his already remarkable past is prologue, the sounds of Gerald Veasley are destined to echo resoundingly as the bass line to his own sterling musical legacy. 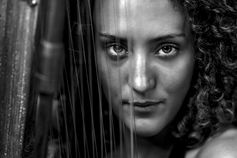 ALTHEA SULLYCOLE debuted on the professional music stage at an early age, appearing as a solo vocalist in Fred Ho’s opera “Warrior Sisters” at Aaron Davis Hall in New York in May, 1995. She joined her father’s Ensemble as a vocalist in the spring of 2009.

Since then, SullyCole has received a degree in Ethnomusicology from Columbia University and has performed as a vocalist with Billy Harper, Billy Bang, Daara J Family, and Royal Messenger, among others. In 2011, she began studying the kora, a West African harp-lute, that can be heard on the Ensemble's 2013 album "Politics: A Tribute to Jayne Cortez." She currently resides in London, in the U.K., where she is continuing her study of the instrument.

"Vision ONE," compiled excerpts from "Seasoning the Greens," 1997.

Join Bill Cole alongside a wonderful line-up of creative artists for an evening of music on June 22nd at Scholes Street Studio! 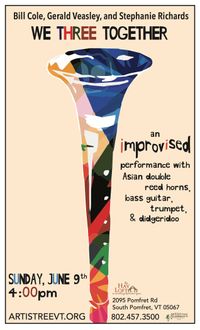 Join Bill Cole on double reed horns from India, China, and Korea plus Didgeridoo with bass guitarist Gerald Veasley and Trumpet player Stephanie Richards for an afternoon of improvised music on June 9th (4 pm) at ArtisTree in Vermont!